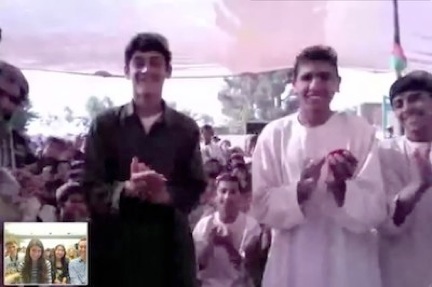 President Barack Obama’s speech about the withdrawal of troops from Afghanistan reminded me of one of the most impressive events I’ve attended lately - the first ever video conference between students in Los Angeles and students in Afghanistan.

One late evening I was sitting in the library of Windward school with a room full of students and teachers, as well as two Marines from Camp Pendleton. We all were curious about who and what would show up on the screen in front of us. Skype technology was supposed to take us to a boy’s school in Helmand province where it was--at that point--early in the morning. And right on time a picture of dozens of students sitting under a tent-roof appeared--most of them wearing white floating clothes and small caps on their heads. Educators on both sides, along with the Marines who helped set up the video technology in Afghanistan, said a few official words. Then the students started to talk:

“How are your grades?” “What are your favorite classes?” “What do you do after school?” “Do you know how to cook?” “Did you ever play tennis?” They communicated as if there was neither a time delay in the transmission nor a translator who had to explain what the questions and answers were about. Under different circumstances I am sure they would have asked each other for phone numbers and facebook contacts. The Afghan boys were obviously surprised that the group of California students was headed by Danielle. They listened with open mouths as the 17-year-old girl started the conversation with a greeting in Pashtun--smiling broadly and pushing her long dark hair back over her shoulders.

The skype conference was initiated by the non-profit-organization Spirit of America, “whose mission is to help US-troops in Afghanistan, Iraq and Africa to help the local people.” In cooperation with Marines on the ground and a lot of volunteers in the United States and abroad, Spirit of America provides essentials like winter clothing, school supplies, sewing machines, swing sets - and now a student exchange of the most unusual form. Jim Hake, the businessman who founded Spirit of America, still had a big smile on his face one hour after the students said goodbye. “This was one of the greatest things I  have seen in my life,” he said, as a summary of the video conference. Major General Richard Mills, who had returned from his deployment to Helmand province the night before added, “With actions like this you can change the world for the better. Congratulations!”

When I was a student I traveled to France and Ireland as part of exchange programs and know that these encounters opened my mind and heart for different cultures, opinions and ways of life.  There won’t be any American students traveling to Afghanistan any time soon, or vice versa, but this Skype conference between Los Angeles and Helmand province was a great start for a groundbreaking conversation. I wish there were exchanges like this all over the world.