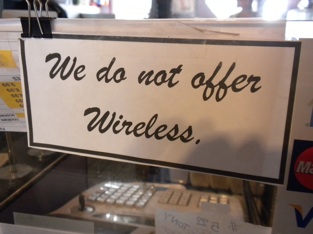 “This is becoming a sanctuary where you might as well be connected with the human beings around you.”

You immediately feel the relaxed and friendly atmosphere when you step into the Downbeat Cafe in Echo Park. Writers sit typing into their computers or stare into space, others study big volumes of literature and groups talk about their next film project, annoying boyfriends or planned vacations. Nobody seems to be in a hurry and there are a lot of regulars who great each other with a few words, a smile and a friendly wave.

The reason for this vibe might be based in the sign that is placed next to the counter: "We do not offer wireless". I can immediately relate to Downbeats' Dan Drodzenko who tells me he turned the service off for good after it broke down several times and the communication with the provider's customer service was rather stressful. "It's been a big relief" says Dan who does not know whether he has a face book account and who does not have cable-TV. He might have lost a few customers when he gave up wireless but he sure has won a few - especially at lunch time when groups come for the fresh food Dan's wife Nathalie prepares in the kitchen. It used to be hard to find a table during those hours because customers would sit surfing the internet for an eternity after ordering one cup of coffee. Refills are free at the Downbeat Cafe! The ones that still come to get work done in the WiFi-free zone say they can achieve more than they used to because they are not distracted by hyperlinks, Email-alerts and other temptations to waste time in the abysses of the internet.

My wireless service broke down for a few hours yesterday. I spent almost an hour on the phone, half an hour crawling on my floor wedged between drum set and desk, unplugging, re-plugging and re-booting, following instructions of an apologetic but seemingly clueless Time Warner Cable representative and catching some dustballs while I was down there. Later I waited for a technician to come who was very friendly but needed help from another technician because he did not bring a cable he needed. That had me dreaming about the Downbeat Cafe. I know I would be helpless in my job without the internet. It's great to chat, mail and skype with friends and family in Germany. But I will make sure to take refuge in a wireless sanctuary whenever I can.