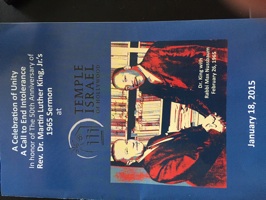 I was not aware of the close relationship between jewish and black communities during the civil rights movement in the 1960s. I learned more about it at the 50th anniversary of Dr. Martin Luther King's sermon at Temple Israel of Hollywood, a jewish community deeply rooted in the commitment for social justice. Researching the story I met Bruce Corwin. He heard Martin Luther King Jr. speak at the Temple in 1965 when he was 25 years old, shared a handshake with the Baptist pastor and was inspired to "drive South to see for myself"

I did not know that some of Dr. King's closest advisors and many of those who marched with him were Jews. I had to refresh my memory about the Exodus, about slavery and the struggle to reach the promised land. I heard the sermon Martin Luther King gave at TIOH, the recordings saved by the synagogue as well as the Torah Rabbi Max Nussbaum brought from Berlin to the United States escaping the fires of Kristallnacht and the Nazi Regime.

Rabbi John Rosove of TIOH took time to explain history and present to me while we were sitting in front of the book case where Martin Luther King and Rabbi Max Nussbaum shook hands. He told me that one half to two thirds of white people marching with Dr. King were Jews and that the reverend had many jewish advisors he consulted before important decisions.

One of those who wanted to march with Martin Luther King but was afraid to do so was Bruce Corwin. He did not march in Alabama but in other places and is engaged in actions for social justice until today. His inspiration: the sermon at TIOH and a trip to Mississippi by himself in a rented car. He needed to see for himself what he had only heard and read about in Los Angeles: the signs, the words, the segregation - and the incomprehensible duality of racism coming from "the nicest people" who served him "the best apple pie of his life".