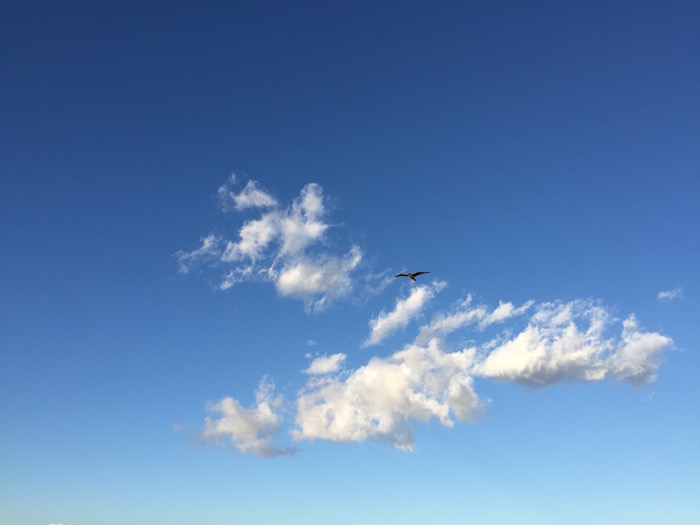 What I brought back from Germany:

Memories of my mother's 80th birthday with family who came together to support and help each other.

Memories of my mother's bent over frail frame.

Memories of my mother's funny self, her frustrated self, her soft self, and her stubborn self.

Happiness and sorrow. Exhaustion and hope.

I walked through brain-fog for two weeks after coming back. Then, I went to the beach.

Seagulls glided sideways over the beach. Pelicans slid head on into rainbow veils of ocean spray.

I stopped to look towards the horizon, when from the buildings behind the boardwalk a dog ran up to me. Its golden coat was a reflection of the now sinking sun. It stood with a mischievous look, then dropped a red rubber ball which stopped right between my yellow sneakers.

999 of 1000 times you will only see me barefoot on the beach. But, because of the nasty cold - and probably because my mother's voice was still in my head - I had not taken off the shoes.

A broken shell lay in the sand next to the rubber ball. It was light blue and white with yellow stripes. Its shape was of an angel's wing.

The days of rain had washed the air so clean I thought, I might see Hawaii at the horizon behind the dog, the seagulls, pelicans and waves.

My mother used to love walks on windy beaches just as much as I do. I can't remember whether she liked to be barefoot too. I know, that she had warm feet always and, like me, asked for windows to be opened. "Frische Luft!" she would command. "Fresh air!" My mother now asks to turn the heating up some notches because she's always cold.

The dog's muzzle was grey. Its eyes were clouded amber. Its nose was fat and black and wet. Its belly showed that someone loved to feed it.

I kicked the ball a few feet towards the ocean. The dog ran, jumped, leaped with flapping ears and wagging tail, rammed its paws into the sand, picked up the ball, turned around and dropped it again in front of me. I smiled and kicked the ball along the beach and off the dog ran. I played along until the dog's owner walked towards us from the lifeguard tower where she had talked with someone. She waved a "Thank you", then called the dog, which danced towards her. She put the red ball into one of these sling things, hers was neon green, that hurls balls a hundred times faster and further than I ever could, and then she aimed towards the water.

The dog let out a happy bark. It was obviously excited about finally facing a legitimate challenge after what now seemed like sorry ball kicks from me. It ran into the ocean and played between ice cold currents with the ball, before returning it to the owner, asking for more.

I realized, that while I thought I had been generous to entertain its old puppy playfulness, the dog might have been the kind one in our game.

Maybe, I thought, my mother still loves walks on windy beaches and that I would love to take her there.

I looked at the horizon once again, bent down, picked up the broken angel shell and then unlaced my shoes. 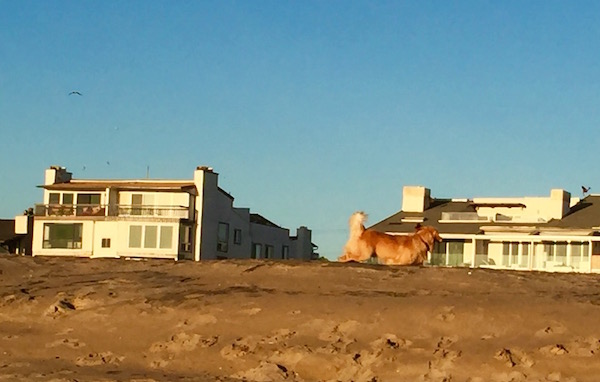