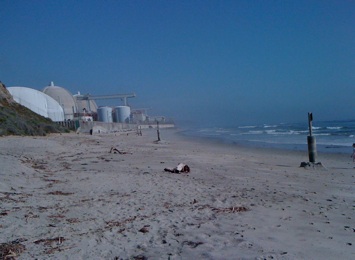 I don’t get it! Why are Californians so relaxed about the two power plants that are standing right at their shore in tsunami zones and near earthquake faults? There is the Diablo Canyon Power Plant near San Luis Obispo and the San Onofre Plant north of San Diego. A new active fault was discovered near Diablo Canyon a few years ago and scientists now say that San Onofre could experience even larger seismic activities than the maximum 7.0 magnitude earthquake that was predicted when the plant was built.

I drove down to San Onofre, which is a lovely beach with a wild cliff overlooking the seemingly endless pacific. I wanted to find out what the locals, the people who live so close to the possible catastrophe, think about these power plants after the events in Japan. I found out that most of them are very relaxed: they surf, hike and fish in the shadow of the cooling towers with no worries at all. “It’s like the sharks. They are there, but well ...” one surfer told me. A student enjoying a day of fishing with his friend said, “If there’s a Tsunami warning, I am not going to go to the beach that has the nuclear reactor on it. But on a nice day like this, why not?” And at the gate of the power plant I found just the regular traffic of employees going to and from work. No sign of protest, no demonstrations.

As a German I have a hard time understanding this; in my homeland  power plants are under more scrutiny than ever. Many of the older plants are being shut down and big demonstrations are held everywhere--people are demanding that the country pull out from dependence on nuclear energy. And Germany lives nowhere close to a Tsunami zone or a San Andreas fault equivalent.

On my quest for answers I did find some concerned citizens at a city council meeting in San Clemente, a lovely coastal town five miles north of San Onofre. They talked about their fears, they talked about glitches at the plant, involving malfunctioning generators and rusty pipes, and they asked to shut the plant down. Everybody stayed calm, nobody screamed or talked for more than the permitted three minutes; there were neither placards nor rallying cries. I asked San Clemente Green founder Gary Headrick--who is very worried about the situation--why there is no coordinated anti nuclear movement that forces president Obama to rethink his commitment to nuclear energy. I also asked him why there is no local uprising that pressures politicians to reevaluate the viability of the old plant, in the face of the disaster that still unfolds on the other side of the pacific. The only explanation he had for the equanimity of his fellow-Californians was this: “I think if you live around something for so long and you just accept the risk that at some point you become numb to it, desensitized. There are people who don’t even know why those two domes are there. Ignorance is bliss!”

I still don’t really get it!